Estimate the prevalence of the abuse of legal and street drugs and associated factors among university students.

Three hundred ninety-eight university students distributed among all courses offered at a university in Brazil. The students answered a questionnaire validated for the evaluation of drug use. The dependent variable was abuse of legal and street drugs. Descriptive analysis was performed, followed by Poisson regression analysis (p < 0.05). 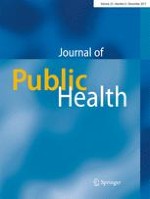 Socioeconomic differences in diet composition of the adult population in southern Brazil: a population-based study

The benefits of sleep coaching in workplace health promotion