Several minimally-invasive technologies are available for cardiac output (CO) measurement in children, but the accuracy and precision of these devices have not yet been evaluated in a systematic review and meta-analysis. We conducted a comprehensive search of the medical literature in PubMed, Cochrane Library of Clinical Trials, Scopus, and Web of Science from its inception to June 2014 assessing the accuracy and precision of all minimally-invasive CO monitoring systems used in children when compared with CO monitoring reference methods. Pooled mean bias, standard deviation, and mean percentage error of included studies were calculated using a random-effects model. The inter-study heterogeneity was also assessed using an I2 statistic. A total of 20 studies (624 patients) were included. The overall random-effects pooled bias, and mean percentage error were 0.13 ± 0.44 l min−1 and 29.1 %, respectively. Significant inter-study heterogeneity was detected (P < 0.0001, I2 = 98.3 %). In the sub-analysis regarding the device, electrical cardiometry showed the smallest bias (−0.03 l min−1) and lowest percentage error (23.6 %). Significant residual heterogeneity remained after conducting sensitivity and subgroup analyses based on the various study characteristics. By meta-regression analysis, we found no independent effects of study characteristics on weighted mean difference between reference and tested methods. Although the pooled bias was small, the mean pooled percentage error was in the gray zone of clinical applicability. In the sub-group analysis, electrical cardiometry was the device that provided the most accurate measurement. However, a high heterogeneity between studies was found, likely due to a wide range of study characteristics. 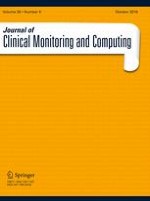 Data clustering methods for the determination of cerebral autoregulation functionality

Intraoperative non invasive intracranial pressure monitoring during pneumoperitoneum: a case report and a review of the published cases and case report series