The purpose of this study was to investigate the qualitative and quantitative accuracy of transpulmonary ultrasound dilution (UD) (COstatus™, Transonic Systems) for the detection of small anatomic shunts. It was a prospective, observational study in a multi-disciplinary pediatric intensive care unit. Seventy-three critically ill children (67 post cardiac surgery), with a median (IQR) age of 10 (3–50.3) months and a median (IQR) weight of 8 (3.43–13) kg were enrolled. Ultrasound dilution (UD) measurements were performed on patients within 1 h of undergoing two-dimensional echocardiography, which was used as the comparator technique. Shunt was diagnosed by characteristic changes on the UD curve shape, and was considered “test-positive” only if two or more measurements suggested the presence of the shunt. The UD technology also provided an estimate of pulmonary to systemic blood flow ratio (Qp:Qs). 12/73 (16.4 %) patients had a shunt identified by both UD and echocardiography. The overall accuracy (95 % CI) was 86.1 % (75.6–96.6 %), with a sensitivity of 85.7 % (57.2–98.2 %) and specificity of 86.4 % (75.0–94.0 %). The estimated Qp:Qs ranged from 0.7 to 1.4, which was consistent qualitatively with the echocardiographic findings on color flow doppler. Shunt was detected by UD alone in eight children; six of these had clinical conditions known to compromise dilution curve analysis (valve regurgitation, asymmetric pulmonary blood flow). Shunt was detected by echocardiography alone in two children; in both cases the shunt was tiny. UD is an accurate method for the detection of small anatomical shunts, both qualitatively and quantitatively. 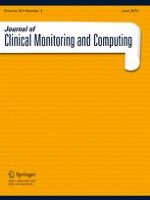 Design and implementation of a hospital wide waveform capture system