main-content
nach oben
Zurück zum Suchergebnis
​
print
Inhaltsverzeichnis
​
insite
Ausgabenarchiv
​
archive
​
insite
Drucken
​
print
» Jetzt Zugang zum Volltext erhalten
Wichtige Hinweise
Each author certifies that he or she, or a member of their immediate family, has no commercial associations (eg, consultancies, stock ownership, equity interest, patent/licensing arrangements, etc) that might pose a conflict of interest in connection with the submitted article.
All ICMJE Conflict of Interest Forms for authors and Clinical Orthopaedics and Related Research editors and board members are on file with the publication and can be viewed on request.
Each author certifies that his or her institution approved the human protocol for this investigation, that all investigations were conducted in conformity with ethical principles of research, and that informed consent for participation in the study was obtained.
This work was performed at Seoul National University College of Medicine, Seoul, South Korea.

The acetabular cup should be properly oriented to prevent dislocation and to reduce wear. However, achieving proper cup placement is challenging with potentially large variations of cup position. We propose a new technique to position the acetabular cup.

We used this technique, then determined actual cup position and subsequent dislocation rate.

We measured acetabular abduction (α°) and anteversion (β°) on preoperative CT scans in 46 patients (50 hips) scheduled for THA. During the operation, we identified the transverse acetabular notch (TAN) and anterior acetabular notch (AAN), a notch at the anterior acetabular margin. We then marked two reference points for 40° abduction at the acetabular rim: the superior point, which is opposite the TAN, and the inferior point at |α − 40| mm inside (when α was > 40°) or outside the TAN (when α was < 40°). We also marked two reference points for 15° anteversion: the posterior point opposite the AAN and the anterior point at |β − 15| mm inside (when β was < 15°) or outside the AAN (when β was > 15°). During cup insertion, we aligned cup abduction to the line between the superior and inferior points and cup anteversion to the line between the anterior and posterior points. We measured cup abduction and anteversion and evaluated the dislocation rate. One patient was lost to followup before 60 months; the minimum followup for the other 45 patients was 60 months (mean, 62.8 months; range, 60–65 months).

We obtained adequate cup position with our method and none of 45 patients (49 hips) had dislocation.

Level IV, therapeutic study. See Guidelines for Authors for a complete description of level of evidence. 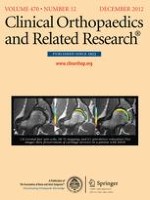 Erratum to: Giant Cell Tumor With Pathologic Fracture: Should We Curette or Resect?

What Are the Factors Associated With Acetabular Correction in Perthes-like Hip Deformities?