Aim: We have examined the cellular action of SN 28049 (N-[2-(dimethylamino)ethyl]-2,6-dimethyl-1-oxo-1,2-dihydrobenzo[b]-1,6-naphthyridine-4-carboxamide), a DNA binding drug with curative activity against the Colon 38 transplantable murine carcinoma, on human tumour cells. Its action has been compared with that of two topoisomerase II-targetted drugs, etoposide and doxorubicin. Methods: The NZM3 melanoma and HCT116 colon carcinoma cell lines, each expressing wild-type p53, were cultured and responses were compared by flow cytometry, electrophoresis, microscopy, and growth of tumour xenografts. Results: Responses of NZM3 cells to all three drugs, as measured by histone H2AX γ-phosphorylation, induction of the p53 pathway and cell cycle arrest, were comparable and typical of those of topoisomerase II poisons. Xenografts of NZM3 cells responded to SN 28049 with a tumour growth delay of 16 days. In contrast, HCT116 cells had an attenuated DNA damage response to the drugs and SN 28049 had no in vivo activity, consistent with low topoisomerase II activity. However, SN 28049 inhibited HCT116 cell growth in vitro and activated the p53 pathway to induce a state with G2/M-phase DNA content, low mitotic index and a high proportion of binucleate cells. Treated cells expressed cyclin E and the senescence marker β-galactosidase but showed low expression of cyclin B and survivin. In comparison, etoposide caused little p53 expression or cycle arrest, and doxorubicin had an intermediate effect. Conclusion: The action of SN 28049 in NZM3 cells is typical of a topoisomerase II poison, but the low topoisomerase IIα activity of HCT116 cells allowed the detection of a second antiproliferative action of SN 28049 in which cells undergo post-mitotic cycle arrest and induction of p53. 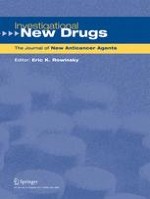 Ascorbate/menadione-induced oxidative stress kills cancer cells that express normal or mutated forms of the oncogenic protein Bcr-Abl. An in vitro and in vivo mechanistic study