Chronic low-grade inflammation occurs in diabetic retinopathy (DR), but the underlying mechanism(s) remains (remain) unclear. NLRP3 inflammasome activation is involved in several other inflammatory diseases. Thus, we investigated the role of the NLRP3 inflammasome signaling pathway in the pathogenesis of DR.

Diabetes was induced in rats by streptozotocin treatment for 8 weeks. They were treated with NLRP3 shRNA or minocycline during the last 4 weeks. High glucose-exposed human retinal microvascular endothelial cells (HRMECs) were co-incubated with antioxidants or subjected to TXNIP or NLRP3 shRNA interference.

Together, our data suggest that the TXNIP/NLRP3 pathway is a potential therapeutic target for the treatment of DR, and the use of minocycline specifically for such therapy may be a new avenue of investigation in inflammatory disease. 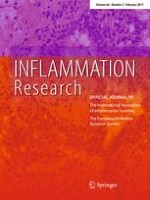 Semaphorins 4A and 4D in chronic inflammatory diseases

Breast cancer cells and bone marrow mesenchymal stromal cells: a regulated modulation of the breast tumor in the context of immune response

Hepatic mobilization of zinc after an experimental surgery, and its relationship with inflammatory cytokines release, and expression of metallothionein and Zip14 transporter