The transcription of axis inhibition protein 2 (AXIN2) and APC was analyzed by real-time PCR. Expression was compared with those in healthy renal tissues as a control. Methylation status of the APC promoter was measured by pyrosequencing and correlated with APC expression. Finally, the mutations of CTNNB1 itself were detected by Sanger sequencing.

The analysis was done in a cohort of 103 WTs, treated in our institution. There was a significant overexpression of AXIN2 in WTs (P < 0.0001), with 33 (32 %) tumors showing higher expression (median + 3× SD) than normal kidney tissue. In contrast, the expression of APC as well as its promoter methylation did not differ from control (P = 0.78; P = 0.82). Finally, there were only seven (6.8 %) mutations detectable in CTNNB1, and five out of seven were seen in WTs with AXIN2 overexpression.

The finding that AXIN2, one of the major Wnt target genes, is overexpressed in our cohort of WTs, is indicative for the activation of the Wnt/β-catenin pathway. However, neither the alteration of APC nor frequent CTNNB1 mutations were seen in our analyses. Therefore, other mechanisms might be responsible for the common activation of the Wnt/β-catenin pathway. 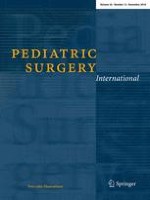 Osmolality of enteral formula and severity of experimental necrotizing enterocolitis