Prostate specific antigen (PSA) screening results in the detection of prostate cancer in many men who are not destined to die from the disease. This often results in overtreatment. One approach to reducing the overtreatment effect is to treat selectively by observing patients with favorable risk disease, and treating only the subsets who are reclassified as higher risk over time, based on biochemical or pathologic progression of disease.

The data supporting the active surveillance concept is reviewed, including the results of several large-scale Phase 2 studies. A number needed to treat analysis was performed based on these studies and a large randomized trial of radical prostatectomy versus watchful waiting. The arguments in favor of, and opposed to, active surveillance are presented.

The largest, most mature Phase 2 study of active surveillance has reported an 85% overall survival and 99% disease-specific survival with a median follow-up of 8 years (range 2–11 years). The number needed to treat analysis suggests that between 80 and 100 radical prostatectomies would be required for each prostate cancer death avoided in a favorable risk, screen detected population.

Active surveillance appears to be safe for favorable risk prostate cancer and represents an appealing alternative to radical treatment for all newly diagnosed men. Further follow-up and a randomized study design are required to conclusively demonstrate the safety of this approach over the 15- to 20-year time frame. A large-scale randomized trial has recently been initiated internationally to address this question. 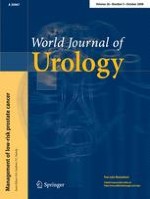 Algorithms, nomograms and the detection of indolent prostate cancer

What is the molecular pathology of low-risk prostate cancer?

Whether adrenal mass more than 5 cm can pose problem in laparoscopic adrenalectomy? An evaluation of 22 patients