A 68-year-old gentleman was referred for elective upper gastrointestinal endoscopy on a background of dysphagia and esophageal candidiasis. A benign peptic stricture was noted, managed with balloon dilation without apparent immediate complication. At completion, however, the patient became confused and agitated, with no improvement despite the reversal of sedation. Two hours later, with all investigations for suspected complications including perforation, negative, he developed acute left-sided hemiparesis. Urgent computed tomography brain and angiogram were both normal. A diagnosis of acute ischemic stroke was made, and the patient was thrombolysed in the Intensive Care Unit. No improvement of the stroke was observed. Seven hours later, the patient developed generalized tonic-clonic seizures that required phenytoin infusion and subsequent intubation and ventilation. The following morning, magnetic resonance imaging brain did not reveal features of a stroke, but instead diffuse cortical and white matter edema in the right frontal lobe, consistent with atypical, unilateral Posterior Reversible Encephalopathy Syndrome (PRES). Signs and symptoms resolved rapidly over the course of several days, and after one month the patient made a complete clinical and radiological recovery. To our knowledge, this is the only case of PRES to arise in the setting of endoscopy and esophageal dilation. 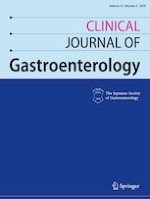 Size does matter: when a large plastic biliary stent ends up in the root of the mesentery