Acute kidney injury (AKI) is associated with significantly increased morbidity and mortality. To provide a uniformly accepted definition, the RIFLE classification was introduced by the Acute Dialysis Quality Initiative, recently modified by the Acute Kidney Injury Network (AKIN), suggesting staging of AKI based on dynamic changes within 48 h. This study compares these two classification systems with regard to outcome.

Sixteen thousand seven hundred and eighty-four ICU patients from 303 ICUs were analysed. Classification was performed according to RIFLE (Risk, Injury, Failure) or according to AKIN (stage 1, 2, 3) without including a requirement of renal replacement therapy in the analysis. Changes of serum creatinine as well as urinary output were assessed for both AKIN and RIFLE during the first 48 h of ICU admission. Primary endpoint was hospital mortality.

Incidence of AKI in our population of critically ill patients was found to range between 28.5 and 35.5% when applying AKIN and RIFLE criteria, respectively, associated with increased hospital mortality averaging 36.4%. Observed-to-expected mortality ratios revealed excess mortality conferred by any degree of AKI increasing from 0.81 for patients classified as non-AKI up to 1.31 and 1.23 with AKIN stage 3 or RIFLE Failure, respectively. AKIN misclassified 1,504 patients as non-AKI compared to RIFLE which misclassified 504 patients.

Acute kidney injury classified by either RIFLE or AKIN is associated with increased hospital mortality. Despite presumed increased sensitivity by the AKIN classification, RIFLE shows better robustness and a higher detection rate of AKI during the first 48 h of ICU admission. 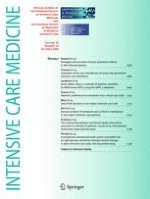 ICU mechanical ventilators, technological advances vs. user friendliness: the right picture is worth a thousand numbers

Tracking changes in cardiac output: methodological considerations for the validation of monitoring devices

The relationship between nutritional intake and clinical outcomes in critically ill patients: results of an international multicenter observational study