Several cases of severe antibody-mediated rejection (AMR) secondary to antibodies against the angiotensin II type 1 receptor (AT1R-Ab) have been described with variable outcome.

We report the case of a 13-year-old boy whose first kidney transplant failed due to steroid-resistant acute cellular rejection, with the subsequent development of sensitization. He received a second kidney transplant which was complicated by early humoral rejection, with weakly positive staining for the complement degradation product C4d. Test results were negative for donor-specific antibodies against human leukocyte antigens (HLA-DSA) and MHC class I-related chain A (MICA) but positive for AT1R-Ab. Retrospective testing of the sera collected during the first kidney transplant was also positive for AT1R-Ab. We therefore hypothesized that the failure of the first transplant was secondary to the same cause. Losartan was immediately introduced into the therapeutic regimen, and the patient showed an excellent clinical and histological recovery.

Testing for AT1R-Ab in any hypertensive patient with acute rejection who tests negative or weakly positive for C4d and negative for HLA-DSA and who is refractory to therapy is highly advisable. Pre-transplant AT1R-Ab may be indicative of the outcome in patients whose first transplant failed. Prompt initiation of treatment with losartan—immediately after transplantation in patients with pre-existing AT1R-Ab—should be encouraged. 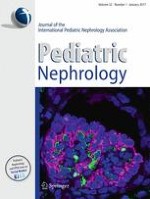 Risk factors for progression in children and young adults with IgA nephropathy: an analysis of 261 cases from the VALIGA European cohort