With a novel finding of significantly lower incidence of acute rejection (AR) in patients with hepatocellular carcinoma (HCC) after liver transplantation, compared with those with benign end-stage liver disease (BESLD), in a large national cohort, we analyzed the correlations among the perioperative immuno-inflammation status, postoperative AR, and prognosis in HCC and BESLD patients with same etiology of hepatitis B virus (HBV), who underwent liver transplantation.

Patients who underwent liver transplantation due to HBV-related HCC or BESLD and experienced AR between September 2008 and April 2017 were analyzed retrospectively and followed up until April 2018. HCC patients with AR were matched with those without AR according to tumor stage and immunosuppressant concentration, at a 1:3 ratio. Preoperative immuno-inflammation status and prognosis of patients in both groups were compared. 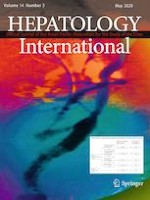 Efficacy of oral antiviral drugs to prevent mother-to-child transmission of hepatitis B virus: a network meta-analysis

Stopping oral antiviral treatment to cure chronic hepatitis B, is it in sight?