Both acute urinary retention (UR) and impacted pelvic mass are rare events in women. We report a case of complete UR caused by impaction of a large myomatous uterus.

A 36-year-old virgin woman presented to the outpatient clinic of our department for further investigation of her pelvic mass. Abdominal sonography showed a solid, hypoechoic, 11 × 9 cm mass filling the pelvic cavity. After sonography, the patient was unable to void second time in that week and a Foley catheter had to be re-inserted. Laparotomy revealed a large myoma filling the entire pelvic cavity. The uterus–mass complex was impacted in the pelvis, leiomyoma had been compressing the uterus into the base of the pelvis. Myomectomy was performed.

It seems that complete UR associated with pelvic mass is usually a sign of pelvic impaction of the mass. 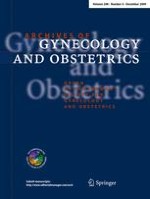 A case of pure uterine lipoma: immunohistochemical and ultrastructural focus

Extended hyperemesis gravidarum in a patient after total thyroidectomy

Splenic metastasis from endometrial carcinoma: report of a case and review of literature

An endometriotic vault fistula presenting with monthly bleeding after hysterectomy