Venous thromboembolism (VTE) remains the number one preventable cause of hospital acquired mortality and morbidity. Each year, more than 12 million patients are at risk for VTE. The delivery of appropriate and timely VTE prophylaxis is still suboptimal in many healthcare institutions and can lead to increased readmissions, morbidity, as well as costs. To clarify this issue further, we performed a retrospective case control study at our institution to determine if poor adherence to the VTE prophylaxis guidelines could lead to an increase in VTE events. This was a retrospective case control study conducted at Winthrop-University Hospital from January 2007 to December 2011. Exclusion criteria were age < 18 and concurrent use of anticoagulant agents. Out of 322 cases of hospital acquired VTE or readmission with VTE within 30 days of discharge, 289 cases were selected for final analysis and paired with age and sex matched controls. Patients with a hospital acquired VTE or a readmission for VTE within 30 days of discharge had a significantly reduced rate of VTE prophylaxis when compared to the control group (54.0 vs. 79.2 %, p < 0.0001). The VTE risk assessment rate was also lower in the VTE group (77.2 vs. 85.5 %, p = 0.035). No difference was noted in the time to prophylaxis administration between the two groups (34.8 vs. 33.1 h, p = 0.34). Lastly, sequential compression device (SCD) documentation rate was not different: 68/116 (58.6 %) vs. 44/87 (50.6 %), p = 0.32, between the two arms. Low adherence to the American College of Chest Physician (ACCP) guidelines for VTE prophylaxis correlated with an increase in hospital acquired VTE. The decreased adherence may be linked to a lower VTE risk assessment rate, and other barriers including incorrect identification of contraindications to pharmacologic prophylaxis, and poor documentation of mechanical prophylaxis. There was no difference in SCD documentation rate and timeliness to administration of initial thromboprophylaxis between the two groups. Future studies are needed to reassess adherence and documentation rates after system-wide improvements. 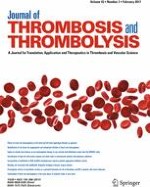 A novel mutation in exon 2 of FGB caused by c.221G>T † substitution, predicting the replacement of the native Arginine at position 74 with a Leucine (p.Arg74Leu † ) in a proband from a Kurdish family with dysfibrinogenaemia and familial venous and arterial thrombosis

A cost-utility analysis of dabigatran, enoxaparin, and usual care for venous thromboprophylaxis after hip or knee replacement surgery in Thailand