Papers regarding adhesive capsulitis (AC) of the shoulder focused on etiology, epidemiology, diagnosis, and treatment; until now, information on shoulder pain characteristics is still scarce. Our aim was to analyze pain intensity and distribution in patients with AC.

The study group was composed of 278 (133M–145F) consecutive patients with AC. After diagnosis, shoulder pain distribution was assessed through an upper limb pain map and pain intensity through a visual analog scale. Patients were distinguished on the basis of gender, age, time elapsed from onset of symptoms, and severity of functional limitation. Data were submitted to statistical analysis.

Intensity of shoulder pain caused by AC was higher in females (p < 0.05); it did not vary with the side and between patient younger and older than 55 years. Patients whose pain arose from more than 3 months suffered a lower intensity of shoulder pain. Furthermore, pain intensity was higher in the most severe form of AC (active forward flexion < 60°) (p < 0.05). Pain was localized predominantly on the anterior aspect of the shoulder (dermatomes C5–C6) and rarely extended beyond the distal third of the arm. No differences were found in pain distribution between male and female, between patients with pain from less or more than 3 months and between different levels of AC severity (p > 0.05).

Shoulder pain due to AC may be influenced by gender and severity of functional limitation. AC pain distribution principally involves anterior aspect of the shoulder with downward extension of the arm until its distal third. 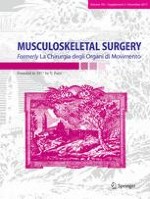 The posterior bundle of the elbow medial collateral ligament: biomechanical study and proposal for a new reconstruction surgical technique

Board of the Society

Monographic issue of the italian society for shoulder and elbow surgery