Autologous fat transplantation is a promising technique for soft tissue augmentation. However, the long-term maintenance of fat grafts remains unpredictable. Based on Peer’s cell theory, techniques that cause less cellular damage will optimize graft integration. Water jet-assisted liposuction (WAL) was introduced as a gentle and efficient technique for harvesting a large volume of fat in a short period of time. In this study, we evaluated the viability and function of adipocytes and preadipocytes harvested using WAL and compared this with the Coleman technique.

Eleven patients were enrolled in this study. Fat grafts were harvested using WAL from one limb and the Coleman technique from the other limb. The lipoaspirates were compared based on the following analyses: trypan blue vital staining for viable adipocyte and preadipocyte counts, glycerol-3-phophatase dehydrogenase assay for adipocyte function, histological examination, and speed of fat harvest.

This study demonstrated that the Coleman technique yields a greater number of viable adipocytes and preadipocytes. Although the histologic structure of fat grafts was comparable between the two techniques, the cellular function of adipocytes was higher for fat grafts harvested using the Coleman technique. Nonetheless, for cases where large volume of fat graft is required, the WAL technique may be preferred for its efficiency in fat harvesting.
Level of Evidence: Not ratable
Anzeige 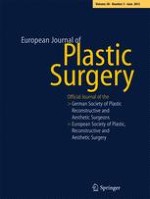 The reconstructive challenges of electrical burns to the scalp: A case series

Erratum to: The reconstructive challenges of electrical burns to the scalp: a case series