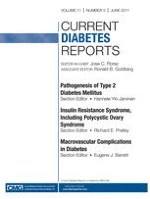 Does the Metabolic Syndrome Carry Additional Risk for Myocardial Infarction?

Which Combination Therapy Is Superior at Reducing Cardiovascular Events in Diabetic Patients with Hypertension?

Why Does NAFLD Predict Type 2 Diabetes?

Peripheral Arterial Disease in Diabetes: Is There a Role for Genetics?