The principal objective of this study was to evaluate the incidence of adjacent-segment degeneration (ASD) in patients who underwent cervical disc arthroplasty (CDA) as compared with anterior cervical discectomy and fusion (ACDF).

It is a prospective cohort study of patients with a single-level cervical degenerative disc disease from C3 to C7 who underwent CDA or ACDF between January 2004 and December 2006, with a minimum follow-up of 3 years. The patients were evaluated pre- and postoperatively with the visual analog scale (VAS), the neck disability index (NDI), and a complete neurological examination. Plain radiographic assessments included sagittal-plane angulation, range of motion (ROM), and radiological signs of ASD.

One hundred and five patients underwent ACDF and 85 were treated with CDA. The postoperative VAS and NDI were equivalent in both groups. The ROM was preserved in the CDA group but with a small decreased tendency within the time. Radiographic evidence of ASD was found in 11 (10.5%) patients in the ACDF group and in 7 (8.8%) subjects in the CDA group. The Kaplan–Meier survival analysis for the ASD occurrence did not reach statistically significant differences (log rank, P = 0.72).

Preservation of motion in the CDA patients was not associated with a reduction of the incidence of symptomatic adjacent-segment disease and there may be other factors that influence ASD. 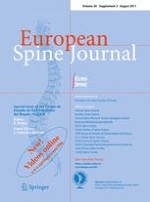 Biomechanical, histological and histomorphometric analyses of calcium phosphate cement compared to PMMA for vertebral augmentation in a validated animal model

Titanium and tantalum as mesenchymal stem cell scaffolds for spinal fusion: an in vitro comparative study