Many of the patients who are undergoing Coronary Artery Bypass Graft have diabetes mellitus or metabolic syndrome and are at risk for hyperglycemia events.

duration of mechanical ventilation and length of ICU staying. The same main outcomes were evaluated after one month.

There were no significant differences between main and secondary outcomes. About late outcomes, sternal wound infection was in the control group (7 patients) more than intervention (1 patient) (P < 0.05). No differences between other complications in both groups were observed. The occurrence of hypoglycemia was low in both groups. Hypokalemia was significantly higher in the intervention than in control (P < 0.001).

The findings showed using adjusted tight glycemic control to a level that is nearby to normal values during cardiac surgery may reduce episodes of hypoglycemia and thus reduces its side effects. As well as reduce hyperglycemic complications such as sternal wound infection. 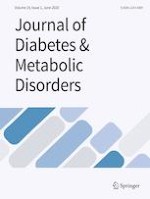