Until recently, there was no approved adjuvant therapy (AT) for renal cell carcinoma (RCC) unless sunitinib was approved in the US. We evaluated clinical opinion and estimated use regarding different treatment options and patient selection of AT in RCC patients based on current scientific data and individual experience in Germany.

We conducted an anonymous survey during a national urology conference in 01/2017. Answers of 157 urologists treating RCC patients could be included. Questions were related to practice setting, treatment of RCC, follow-up strategy, physicians’ personal opinion and individually different important parameters regarding S-TRAC and ASSURE-trial.

82% were office based. 67% were located in larger cities. 83% reported that nephron-sparing surgery (NSS) was performed in tumors with diameter < 4 cm. Follow-up was done mainly in concordance with guideline recommendations. 68% treated an average of 2.9 patients/year with systemic therapy. Therapy was predominantly advocated using sunitinib (94%). Urologists were informed about S-TRAC and ASSURE-trial. For 47%, reported hazard ratio is the most important parameter to understand trial results followed by overall survival (OS) in 46%, disease-free survival in 38%, and results of other trials in 34%. The most convincing parameter to decide on AT is OS (69%). 62% placed their confidence in ASSURE over STRAC-trial. 44% would use AT for 12 months. Nodal involvement was the most common denominator for use of AT. 82% favor sunitinib as AT.

A minority of urologists would use AT and are more confident in ASSURE-trial. Reluctance of prescribing AT mainly is based on lack of OS data and conflicting trial results. 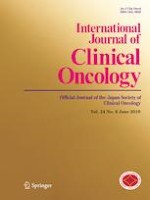 Patterns of lymph node metastasis and the management of neck dissection for parotid carcinomas: a single-institute experience