The online version of this article (doi:10.​1007/​s00262-017-2059-y) contains supplementary material, which is available to authorized users.
Preliminary work on this project was published in abstract form, at the American Society of Hematology 57th Annual Meeting in 2015 (Orlando, Florida) and also in part at the 58th meeting in 2016 (San Diego, California) [1, 2].

The delivery of immunomodulators directly into the tumor potentially harnesses the existing antigen, tumor-specific infiltrating lymphocytes, and antigen presenting cells. This can confer specificity and generate a potent systemic anti-tumor immune response with lower doses and less toxicity compared to systemic administration, in effect an in situ vaccine. Here, we test this concept using the novel combination of immunomodulators anti-CTLA4, -CD137, and -OX40. The triple combination administered intratumorally at low doses to one tumor of a dual tumor mouse model had dramatic local and systemic anti-tumor efficacy in lymphoma (A20) and solid tumor (MC38) models, consistent with an abscopal effect. The minimal effective dose was 10 μg each. The effect was dependent on CD8 T-cells. Intratumoral administration resulted in superior local and distant tumor control compared to systemic routes, supporting the in situ vaccine concept. In a single tumor A20 model, injection close to the tDLN resulted in similar efficacy as intratumoral and significantly better than targeting a non-tDLN, supporting the role of the tDLN as a viable immunotherapy target in addition to the tumor itself. Distribution studies confirmed expected concentration of antibodies in tumor and tDLN, in keeping with the anti-tumor results. Overall intratumoral or peri-tDLN administration of the novel combination of anti-CTLA4, anti-CD137, and anti-OX40, all agents in the clinic or clinical trials, demonstrates potent systemic anti-tumor effects. This immunotherapeutic combination is promising for future clinical development via both these safe and highly efficacious routes of administration. 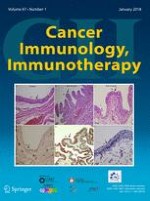 Safety of shortened infusion times for combined ipilimumab and nivolumab

Ipilimumab and early signs of pulmonary toxicity in patients with metastastic melanoma: a prospective observational study