The use of peripheral arterial tonometry (PAT) to assess microvascular endothelial function is getting increasingly popular in the pediatric population. The aim of the present study was to examine the impact of blood pressure (BP) hyperreactivity on microvascular hyperemic reaction in healthy, normotensive adolescents.

Fifty-two adolescents with a mean age of 14.5 ± 0.7 years were investigated. Microvascular endothelial function was assessed at rest and after exhaustive cycling exercise using PAT to determine the reactive hyperemic index (RHI, primary endpoint). Hyperreactors were identified according to their cardiovascular response to a cold pressor test. Indices of autonomic tone were assessed with an ambulatory electrocardiograph and cardiopulmonary exercise testing was performed on a cycle ergometer. Physical activity was measured using accelerometry. ANOVA with repeated measures and Tukey HSD post hoc tests were applied to determine differences between BP hyperreactors and controls (normal reactors).

Sixteen adolescents were identified as hyperreactors and matched with regard to age, sex, pubertal status, and height with 16 normal reactors. At rest, hyperreactors had a significantly higher RHI than normal reactors (2.1 ± 0.4 vs. 1.6 ± 0.4, P = 0.003). After exhaustive cycling exercise, the differences in RHI were abolished. No differences between these two groups existed in physical activity levels, exercise capacity and indices of autonomic tone. 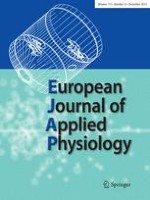