The online version of this article (doi:10.​1007/​s12026-017-8936-9) contains supplementary material, which is available to authorized users.
Daniela Sauma and Natalia Crisóstomo contributed equally to this work.

Systemic lupus erythematosus (SLE) is an autoimmune disease characterized by increased autoantibody production that leads to multiple tissue injuries. Dendritic cells (DCs) are important orchestrators of immune responses and key components in fine-tuning the balance between tolerance and immunity. However, their role in autoimmune disorders such as SLE remains uncertain. We analyzed the contribution of DCs in triggering SLE by adoptively transferring splenic DCs from aged autoimmune [NZB×NZW]F1 (BWF1) mice to young healthy BWF1 mice. We observed that the transfer of DCs from autoimmune mice to pre-autoimmune mice induced high autoantibody titers in the serum of recipient mice. Moreover, autoimmune DCs from aged BWF1 mice were crucial for the expansion and differentiation of plasmablasts and CD5+ B cells or B1-like cells in the peripheral blood, and spleen of recipient BWF1 mice, a phenomenon that is observed in autoimmune BWF1 mice. On the other hand, DCs from aged BWF1 mice participated in the expansion and differentiation of DCs and IFN-γ-producing T cells. These results reveal that DCs from autoimmune BWF1 mice exhibit functional and phenotypic characteristics that allow them to trigger B cell hyperactivation, as well as DC and T cell expansion and differentiation, thereby promoting an exacerbated humoral response in lupus-prone mice. 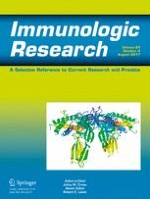 The NLRP3 and CASP1 gene polymorphisms are associated with developing of acute coronary syndrome: a case-control study

IL-27 regulates the adherence, proliferation, and migration of MSCs and enhances their regulatory effects on Th1 and Th2 subset generations