The objective of this work is to report on a series of five patients with adult-onset leukoencephalopathy with neuroaxonal spheroids and pigmented glia (ALSP). ALSP is a rare adult-onset leukodystrophy, which encompasses hereditary diffuse leukoencephalopathy with axonal spheroids and pigmentary orthochromatic leukodystrophy. This was a retrospective chart review and literature review. Five previously healthy women presented with a rapidly progressive neurological disorder at ages 39, 37, 40, 30, and 47, respectively. All five individuals were initially diagnosed as suffering from multiple sclerosis. The clinical courses of the five patients were dominated by progressive spastic quadriparesis (patient 5, newly diagnosed, has paraparesis at this time) and dementia. Brain magnetic resonance imaging (MRI) showed diffuse cerebral atrophy, corpus callosal atrophy, and diffuse T2 hyperintensities in the subcortical and periventricular white matter with no gadolinium enhancing lesions. Three patients showed involvement of pyramidal tracts from motor cortex to the brainstem. Cerebrospinal fluid was normal in all cases. Diagnosis of ALSP was established by biopsy (two cases) and autopsy (two cases). Histopathology showed the presence of neuroaxonal spheroids in all four cases and pigmented glia in three. In the fifth case, diagnosis was established by genetic analysis alone that showed a disease-causing mutation in the colony-stimulating factor 1 receptor (CSF1R) gene. Genetic analysis was done in three patients with available DNA, and identified the disease-causing mutation in all three, including a novel mutation F828S. ALSP may be suspected in adults with rapid to subacute progression of neurological disease when (1) MRI shows corpus callosal atrophy on a background of generalized brain atrophy and diffuse white matter disease without postcontrast enhancement, (2) CSF studies are normal, and (3) studies for systemic inflammatory diseases and specific leukodystrophies are normal. Diagnosis may be made without histopathological evidence when a disease-causing mutation is demonstrated in the CSF1R gene. 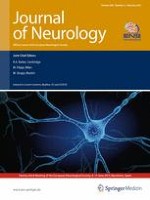 Seasonal and meteorological determinants of aneurysmal subarachnoid hemorrhage: a systematic review and meta-analysis

Communication of the European Neurological Society

A randomized clinical trial of lithium in multiple system atrophy