Inoperable hepatocellular carcinoma (HCC) can be treated with laparoscopic radiofrequency ablation (LRFA), which is generally a more accurate and accessible procedure than percutaneous RFA (PRFA). However, few studies have compared survival outcomes between LRFA and PRFA in patients with HCC.

This study aimed to compare the efficacy of LRFA and PRFA for HCC treatment.

Patients who underwent PRFA or LRFA as an initial treatment modality between April 2005 and April 2016 were enrolled in this study. The overall and recurrence-free survival rates were examined for each patient. Additionally, propensity score matching was performed for both groups.

The baseline characteristics of patients in the PRFA and LRFA groups showed several minor differences. Multivariate analysis showed that the RFA method was not a critical determinant of recurrence-free or overall survival (p = 0.069 and p = 0.406). Among patients who underwent RFA as the initial treatment modality, there was no significant effect between either RFA procedures on survival. After propensity score matching, univariate analysis showed a significant difference in overall survival between PRFA and LRFA (p = 0.031). Multivariate analysis showed that LRFA is a strong factor that contributed to an improved overall survival in HCC patients (hazard ratio 0.108, p = 0.040). Furthermore, our data showed that LRFA was able to limit multiple intrahepatic recurrences, as well as prevent marginal recurrence.

LRFA appears to be superior to PRFA in terms of survival. LRFA may help reduce mortality in HCC patients. 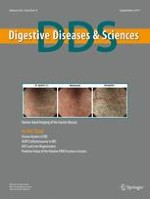 Is There a Link Between H. Pylori and the Epidemiology of Crohn’s Disease?

BMI Is a Risk Factor for Colorectal Cancer Mortality

miRNA Signature of Hepatocellular Carcinoma Vascularization: How the Controls Can Influence the Signature