Oxidative stress is involved in the pathogenesis of hypertensive disorders such as preeclampsia (PE) and associated with the human vitamin E-binding protein afamin. The aim of this study was, therefore, to analyse afamin in the first trimester of patients developing PE later in pregnancy and in control subjects without pregnancy complications.

In this retrospective study, 137 serum samples from the first trimester of pregnancy were analysed in a case–control study design. 39 patients developed PE (10 patients with early-onset and 29 patients with late onset disease) and 98 women had an uncomplicated pregnancy. Mann–Whitney U test, t test, logistic regression and ROC analyses were performed for statistical evaluation.

Serum afamin concentrations are elevated in the first trimester among patients developing PE compared to controls. Substantial differences were observed mainly among patients with late-onset PE. 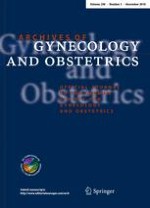 Is an obstetrician/gynecologist a worker, artist, or scholar? Anxiety of an old professor

A prospective cohort study on the prediction of the diagnosis-to-delivery time in preeclamptic pregnancies: should the sFlt-1/PlGF ratio be added to routine evaluations?