The sun mushroom (Agaricus brasiliensis) is considered a major source of bioactive compounds with potential health benefits. Mushrooms typically act as lipid-lowering agents; however, little is known about the mechanisms of action of A. brasiliensis in biological systems. This study aimed to determine the underlying mechanism involved in the cholesterol-lowering effect of A. brasiliensis through the assessment of fecal and serum lipid profiles in addition to gene expression analysis of specific transcription factors, enzymes, and transporters involved in cholesterol homeostasis.

Our results suggest that consumption of A. brasiliensis improves the serum lipid profile in hypercholesterolemic rats by modulating the expression of key genes involved in hepatic cholesterol metabolism. 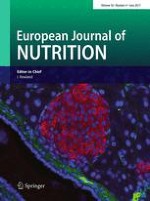 Reply to letter to the editor to “Soy isoflavone intake and prevalence of depressive symptoms during pregnancy in Japan: baseline data from the Kyushu Okinawa Maternal and Child Health Study”

Foods contributing to vitamin B6, folate, and vitamin B12 intakes and biomarkers status in European adolescents: The HELENA study

Long-term association between the dietary inflammatory index and cognitive functioning: findings from the SU.VI.MAX study