One of the commonly used systemic agents for the treatment of aggressive fibromatosis is the anti-oestrogen drug tamoxifen. However, data on efficacy and optimum methods of response assessment are limited, consisting mainly of small case series and reports.

A retrospective database was used to identify consecutive patients diagnosed with aggressive fibromatosis (AF) and treated with tamoxifen plus/minus non-steroidal anti-inflammatory drugs at our tertiary referral centre between 2007 and 2014. MRI and symptom changes were recorded. 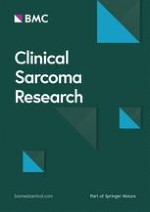 Unicentric epithelioid hemangioendothelioma of the calcaneus: a case report and review of literature