Alcohol, depression, and intimate partner violence (IPV) are endemic in sub-Saharan Africa. This article examines whether and how these conditions affect mothers living with HIV (MLH), compared to mothers without HIV (MWOH). In particular, we assess the influence of these comorbidities on engagement in HIV care and adherence to antiretroviral therapies (ARV) among MLH. Data on maternal HIV care are typically based on clinic samples, with substantial loss to follow-up. This study fills that gap by including all mothers in specified areas. A cohort study examines MLH in Cape Town, South Africa recruited in pregnancy and followed repeatedly for 5 years, compared to MWOH. Almost all (98%) pregnant women in 12 neighborhoods (N = 594) were recruited in pregnancy. Mothers and children were reassessed five times over 5 years with high retention rates at each of the six assessments, from 98.7% at 2 weeks to 82.8% at 5 years post-birth. MLH’s uptake and adherence to HIV care was evaluated over time associated with maternal comorbidities of alcohol use, depressed mood, and IPV using mixed effects logistic regression. MLH have fewer resources (income, food, education) and are more likely to face challenges from alcohol, depression, and having seropositive partners over time than MWOH. Only 22.6% of MLH were consistently engaged in HIV care from 6 months to 5 years post-birth. At 5 years, 86.7% self-reported engaged in HIV care, 76.9% were receiving ARVs and 87% of those on ARV reported consistent ARV adherence. However, data on viral suppression are unavailable. Alcohol use, but not depressed mood or IPV, was significantly related to reduced uptake of HIV care and adherence to ARV over time. Adherence to lifelong ARV by MLH requires a combination of structural and behaviorally-focused interventions. Alcohol abuse is not typically addressed in low and middle-income countries, but is critical to support MLH. 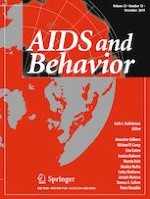 Impaired Neurocognitive Performance and Mortality in HIV: Assessing the Prognostic Value of the HIV-Dementia Scale