Sports betting television adverts ( N = 135) were sampled from a larger cross-sectional study. Advertisements with an upload date from June 2014 to November 2016 were downloaded from the official YouTube channels of 29 different betting brands. These brands were primarily selected based on their presence as sponsors, official partners, or regular advertisers in sport events. All adverts met the following inclusion criteria: (i) only those advertising soccer were included, thus excluding horse and dog racing as well as other sports whose popularity is more country-specific; (ii) only advertisements from Spain and the UK were selected because these were the two languages that the authors could understand as native speakers, and the representativeness of La Liga and Premier League competitions in European soccer (first and third, respectively, in Union of European Football Associations [UEFA] ranking); (iii) the advertisements belonged to companies with a legal license to operate in one or both of the countries analyzed; (iv) the adverts had to have a televisual and temporal format (between 20 and 60 s duration). This latter inclusion criterion excluded made-for-internet promotions that typically allow informal shooting or discussion-like videos including tipsters sponsoring a brand. Also, longer advertisements were excluded because they were unlikely to have been shown on television; and (v) for the purpose of assessing new behavioral patterns attached to new products, the advertisements had to focus on online sports betting, excluding those addressing offline betting. Further details of the adverts analyzed can be obtained from the first author on demand.
To check if the YouTube sample corresponded to the actual adverts shown on television, an additional sample of nine UEFA Champions League, English Premier League, and Spanish La Liga soccer matches (including pre- and post-match advert breaks) was recorded from May to June 2016. The results confirmed that every television advertisement was made accessible, sometimes with a few weeks’ delay, via the operator’s YouTube profile. Also, the electronic banners around the soccer field were analyzed to make sure no betting brand being promoted was excluded from the study sample.

The initial analysis was conducted by three coders. Coder 1 rated the whole sample of advertisements. For reliability purposes, a sub-sample composed 23 adverts (17.03%) was randomly generated and coded independently by coders 2 and 3. Interrater reliability was calculated using ReCal3 software, which is especially designed for situations with three or more coders analyzing nominal data wherein Cronbach’s alpha is not useful. In the present study, a solid interrater reliability was found. Krippendorff’s alpha coefficients ranged from 0.78 to 1, with all except one variable punctuating below the 0.80 cut-off point generally recommended for acceptable reliability, but enough for exploratory analysis (Krippendorff 2013).
Given the exploratory nature of the study, a mixed-methods approach was favored by the researchers for the second round of analysis. Thus, once the betting adverts portraying alcohol and LNVF consumption were identified, coder 1 conducted additional qualitative coding on them to deepen the exploratory questions that guided the initial analysis. The definition of LNVF included snacks (e.g., crisps, popcorn, etc.), sugary drinks, pizza, hamburgers, and French fries.
To assess the association between alcohol and LNVF with sports culture (RQ1), characters in the adverts consuming alcohol or LNVF were hypothesized to be associated with (1) having a sentimental bond with sport (e.g., team loyalty); (2) being depicted as in an emotional state; (3) appearing celebrating a goal; (4) betting while viewing sport (i.e., in-play betting); (5) being offered by the advert free bets, money back, or similar promotions; and (6) showing satisfaction from the outcome of a bet or a game. To explore RQ2, namely the association between unhealthy food and alcohol with friendship building, variables 1 to 6 were hypothesized to vary depending on the number of characters in adverts portrayed drinking alcohol; and similarly on the number of characters in adverts portrayed eating LNVF. Additionally, adverts were analyzed in terms of (7) the type of drink consumed, under the assumption that drinking beer (e.g., lager, cider) will be more likely to occur in group settings in contrast to drinking wine or spirits.
Chi-square tests were performed between the variables outlined above using IBM SPSS 23 for Mac. Fisher’s exact test (one-sided) was used when the distribution expected cell counts were below 5. Considering the exploratory purpose of the study, and given the scarcity of scientific literature in the field and the mixed-methods approach, a threshold p value lower than 0.05 was accepted as statistically significant without controlling for multiple comparisons error.
Anzeige

The present study provides a preliminary and tentative understanding of how sports betting adverts depict gambling in interaction with eating and drinking behavior. Approximately one-quarter of the analyzed sample depicted alcohol (22.2%) and LNVF (26.7%) consumption. However, when combined, 55 out of 135 adverts (40.7%) depicted at least one of the two behaviors. Gambling, like consuming LNVF and alcohol, is largely considered a risky product whose marketing and advertising must be limited (Hing et al. 2014, 2015, 2016). Characters in gambling narratives, as seen in the adverts sampled, can help to create a representational atmosphere of normality regarding the simultaneous use of two or more of such potentially risky products. Also, the transmission of such adverts does not happen in isolation. On the contrary, they add to existing alcohol and food products, which are also heavily advertised in the context of sport events (Bestman et al. 2015; Lamont et al. 2011; Sproston et al. 2015; Thomas et al. 2012).
Under the assumptions for RQ1, alcohol drinking was hypothesized to be associated with sports culture. The analyses showed that betting adverts portraying alcohol consumption, as opposed to those without alcohol, showed (i) more frequently sentimental bonds between characters and sport; (ii) more frequent betting while watching a live game; (iii) more goal celebrations; and (iv) in general, characters demonstrating greater satisfaction for the outcome of the games or bets. These activities were examined in order to explore the representation of bettors’ behavior in emotionally charged situations. Sport is far from being an emotionally neutral content, and often entails identity and belonging aspects (Giulianotti et al. 2005; Wenner 2011). Thus, betting advertising appears to capitalize on such sentiments arising from sports culture and aligns them with betting culture, corroborating recent research on the field (Deans et al. 2016, 2017). In addition, emotionally charged situations such as betting while viewing a game or celebrating a goal are arguably more likely to be associated with instant decision-making and urgency, potentially harming those with impulse control disorders (Hodgins et al. 2016). Obviously, the advertising and marketing industry is a manufacturer of happy-ending stories, and as such, gambling, eating, and drinking are unlikely to be portrayed in a context of excessive or disordered consumption. However, against a gambling backdrop, the simultaneous representation of emotional situations and alcohol consumption, even moderate, could also encourage disinhibition.
Friendship building was also hypothesized in relation to the number of characters drinking alcohol in the adverts, as proposed in RQ2. Simply put, those adverts that depicted alcohol drinking featured (on average) more characters in their narratives than those adverts with no alcohol drinking. Solitary gambling, similar to solitary alcohol drinking, exposes individuals to greater risks of developing problems (Griffiths 1995). However, studies have raised concerns regarding the misconception that drinking, especially beer, when done socially cannot be harmful (Strate 1992), reminiscent of the bettors’ idea that gambling in group is safer, as expressed in previous qualitative research (e.g., Deans et al. 2016). In this context, betting with friends might also add to the security component of offers such as guaranteed money back or free bet coupons, explaining why they are more likely to be offered in such circumstances.
Bonding with peers has been previously been proposed as a major component of gambling advertising, both in sports (Lindsay et al. 2013) as well as in other forms of gambling (McMullan and Miller 2008). Prototypical betting advertising representations continue to portray betting and sport viewing as a communal experience, an image that appears to be more aspirational than realistic considering that the majority of people consume sport alone (ESPN 2010). Group behavior, contrary to the idea implied in betting adverts sampled in the present study, could facilitate the feedback and normalization of a vicious circle of risky behaviors, as suggested by the fact that adverts with more characters drinking also were more likely associated with LNVF eating.
Anzeige
The relatively small sample of adverts analyzed cannot be ignored when acknowledging the limitations of the study. The data here can only be interpreted as a preliminary and tentative examination of the simultaneous presence of gambling, alcohol, and LNVF in social representations that have the capacity to affect bettors’ behavior, particularly those more vulnerable such as problem gamblers and minors. Future research will need to evaluate whether new forms of advertising are having an impact on the co-occurrence of these three behaviors.

To the authors’ knowledge, this is the first research study that has explored the interaction of drinking alcohol and eating unhealthy food in gambling adverts. It is argued that situational factors such as the advertising and marketing of gambling can help to shape betting behavior, by means of depicting specific scenarios and actions, while ignoring others, that show characters drinking alcohol and betting, and less frequently, eating unhealthy food. It has been further argued that drinking alcohol is typically shown in betting adverts in clear association with sports culture and gambling. Similarly, betting advertising might be resorting to characters drinking alcohol, largely beer, to enhance the message of friendship bonding that appears to be inherently associated with the enjoyment of sport. Media and advertising regulators (as well as policymakers more generally) should be cognizant and react to the symbolic linkage of independent risky behaviors, particularly in contexts of enhanced emotions and impulses, such as popular sports, and considering the appeal of such content to children.

Hibai Lopez-Gonzalez, Ana Estévez, Susana Jiménenez-Murcia, and Mark D. Griffiths declare that they have no conflict of interest. Mark D. Griffiths declares that he has received funding for a number of research projects in the area of gambling education for young people, social responsibility in gambling and gambling treatment from the Responsibility in Gambling Trust, a charitable body which funds its research program based on donations from the gambling industry. He also undertakes consultancy for various gaming companies in the area of social responsibility in gambling.

This work was supported by the Government of the Basque Country, Spain, under grant reference (Eusko Jaurlaritza, POS_2015_1_0062).
Open Access This article is distributed under the terms of the Creative Commons Attribution 4.0 International License (http://creativecommons.org/licenses/by/4.0/), which permits unrestricted use, distribution, and reproduction in any medium, provided you give appropriate credit to the original author(s) and the source, provide a link to the Creative Commons license, and indicate if changes were made. 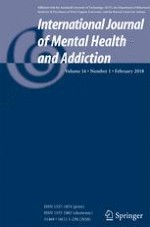 Digital Traces of Behaviour Within Addiction: Response to Griffiths (2017)