This study evaluated if the probability of postpartum depression (PPD) increases with an upward gradient of physical intimate partner violence (IPV) during pregnancy and whether substance use by any member of the couple modifies this relationship.

Physical IPV during pregnancy was reported by 37.8% of respondents and 24.3% were presumably depressed (EPDS score ≥ 12). Interaction between physical IPV and partners’ alcohol misuse was statistically significant (p = 0.026). Although there was a significant increase in PPD with just one act of physical IPV in the absence of a partners’ alcohol misuse, mounting acts did not have any further influence. Conversely, when partners misused alcohol, the probability progressively and steeply increased from two acts onwards, reaching almost sevenfold by six cumulative physical IPV events as opposed to none.

The results reinforce the relevance of physical IPV as a risk factor to PPD. They also suggest that context matters, partners’ alcohol misuse acting as an important effect modifier. These evidences justify tailored preventive, screening and intervention procedures for IPV and alcohol misuse during pregnancy and the postpartum period. 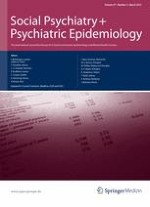