Alterations in the p16/cyclinD1/Rb and ARF/Mdm2/p53 pathways are frequent events in the pathogenesis of squamous cell carcinomas. Different mechanisms of p16 regulation have been described for penile carcinomas so far. Therefore, expression of p16 and p53 was immunohistochemically detected with monoclonal antibodies in 52 primary invasive penile squamous cell carcinomas. The carcinomas were analyzed for allelic loss (LOH) in p16 INK4A and p53, as well as for mutations in the p16 INK4A and the p53 gene. In addition, we examined the promoter status of p16 INK4A by methylation-specific PCR. The presence of human papilloma virus (HPV) 6/11, HPV 16 and HPV 18 DNA was analyzed by PCR. Data were compared to clinical data. Concerning p16, 26 (50%) tumors showed positive immunohistochemistry, 32 (62%) tumors showed allelic loss and 22 tumors (42%) showed promoter hypermethylation. All tumors with negative p16 immunohistochemistry showed LOH near the p16 INK4A locus and/or hypermethylation of the p16 INK4A promoter. HPV 16 DNA was detected in 17 tumors, ten of them with positive p16 immunostaining. The remaining seven tumors with negative p16 staining showed allelic loss and/or promoter hypermethylation. Evidence of lymph node metastasis was significantly associated with negative p16 immunohistochemistry as well as with combined LOH and promoter hypermethylation (p = 0.003 and p = 0.018, respectively). Allelic loss around p53 was found in 22 tumors (42%), and seven mutations of the p53 gene could be demonstrated in our tumors. No correlations could be found between any p53 alteration and clinical parameters. 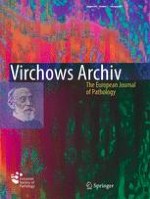 The role of high-risk human papillomavirus infection in oral and oropharyngeal squamous cell carcinoma in non-smoking and non-drinking patients: a clinicopathological and molecular study of 46 cases