Recently, it was shown that patients with Parkinson’s disease (PD) and freezing of gait (FOG) can also experience freezing episodes during handwriting and present writing problems outside these episodes. So far, the neural networks underlying increased handwriting problems in subjects with FOG are unclear. This study used dynamic causal modeling of fMRI data to investigate neural network dynamics underlying freezing-related handwriting problems and how these networks changed in response to visual cues. Twenty-seven non-freezers and ten freezers performed a pre-writing task with and without visual cues in the scanner with their right hand. The results showed that freezers and non-freezers were able to recruit networks involved in cued and uncued writing in a similar fashion. Whole group analysis also revealed a trend towards altered visuomotor integration in patients with FOG. Next, we controlled for differences in disease severity between both patient groups using a sensitivity analysis. For this, a subgroup of ten non-freezers matched for disease severity was selected by an independent researcher. This analysis further exposed significantly weaker coupling in mostly left hemispheric visuo-parietal, parietal – supplementary motor area, parietal – premotor, and premotor–M1 pathways in freezers compared to non-freezers, irrespective of cues. Correlation analyses revealed that these impairments in connectivity were related to writing amplitude and quality. Taken together, these findings show that freezers have reduced involvement of the supplementary motor area in the motor network, which explains the impaired writing amplitude regulation in this group. In addition, weaker supportive premotor connectivity may have contributed to micrographia in freezers, a pattern that was independent of cueing. 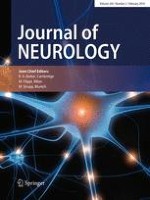 The BRAIN test: a keyboard-tapping test to assess disability and clinical features of multiple sclerosis

Intrathecal oligoclonal bands synthesis in multiple sclerosis: is it always a prognostic factor?

Mutations outside the N-terminal part of RBCK1 may cause polyglucosan body myopathy with immunological dysfunction: expanding the genotype–phenotype spectrum