Sleep is involved in the regulation of inflammation, healing, and digestion. The pathophysiology of Crohn’s disease (CD) is unclear, and the role of sleep disturbances has recently been suggested.

The present study investigated a putative association between sleep disturbances and CD activity.

We conducted a prospective observational monocenter translational study, recruiting major CD patients from 2013 to 2015. Disease activity was assessed by the Harvey-Bradshaw index and the CD activity index. Objective sleep quantity and quality were measured by wrist actigraphy over a period of 7 days. The primary objective was to look for an association between wrist actigraphy parameters and CD activity.

Sleep efficiency is lower in patients with active CD than in those in remission. Further studies aimed at better characterizing CD patients’ sleep are warranted. 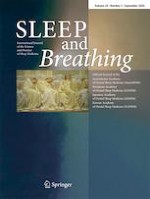 The serum YKL-40 level is a potential biomarker for OSAHS: a systematic review and meta-analysis