Bibliometric and Altmetric analyses highlight key publications, which have been considered to be the most influential in their field. The hypothesis was that highly cited articles would correlate positively with levels of evidence and Altmetric scores (AS) and rank.

Surgery as a search term was entered into Thomson Reuter’s Web of Science database to identify all English-language full articles. The 100 most cited articles were analysed by topic, journal, author, year, institution, and AS.

Bibliometric and Altmetric analyses provide important but different perspectives regarding article impact, which are unrelated to evidence level. 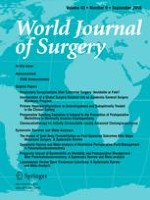 Primary Hyperparathyroidism is Underdiagnosed and Suboptimally Treated in the Clinical Setting

Commentary on Burke TF et al. “Safety and Feasibility of a Ketamine Package to Support Emergency and Essential Surgery in Kenya when No Anesthetist is Available: An Analysis of 1216 Consecutive Operative Procedures”

Letter to the Editor: Postoperative Bleeding After Laparoscopic Pancreaticoduodenectomy: The Achilles’ Heel?