Although lung cancer continues to be the leading cause of cancer-related death, accurate diagnosis followed by personalized treatment is expected to raise the 5-year survival rate. Targeted therapies are now in routine clinical use, in particular for lung adenocarcinoma (ADC). Fibroblast growth factor receptor 1 (FGFR1) has recently emerged as a molecular target, especially in squamous cell/epidermoid carcinoma (SQC) of the lung. This paper evaluates FGFR1 expression and gene copy number in adenocarcinomas, squamous cell carcinomas, pleomorphic carcinomas (PLEOMC) and adenosquamous carcinomas (ADSQC) of the lung and also explores the epithelial-mesenchymal transition (EMT) pathway. We studied 76 lung carcinomas: 34 ADC, 24 SQC, 10 PLEOMC and 8 ADSQC. FGFR1 expression was evaluated by immunohistochemistry and gene amplification by fluorescence in situ hybridization (FISH). Higher FGFR1 protein expression was observed in all tumour types compared to non-tumour tissue. FGFR1 expression was higher in ADC and PLEOMC than in SQC. We found a tendency to higher expression in ADC than in SQC and significantly higher expression in PLEOMC than in other histological subtypes. FISH-based amplification of FGFR1 was identified in 15 (20 %) lung carcinomas: 5 (15 %) ADC, 5 (21 %) SQC, 3 (30 %) PLEOMC and 2 (25 %) ADSQC. Amplification was more frequent in SQC without significant differences. FGFR1 protein is expressed in the majority of lung carcinomas, though it is higher in ADC and PLEOMC (the latter may reflect the importance of FGFR1 control of the EMT pathway). FGFR1 amplification was identified in all types of lung carcinoma. Although FGFR1 is most frequently amplified in SQC, other histological types merit assessment of FGFR1 amplification, in order to select patients that might benefit from targeted therapy. 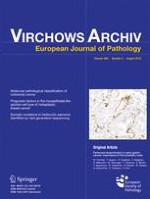 Epithelioid angiosarcoma of the thyroid gland without distant metastases at diagnosis: report of six cases with a long follow-up

Impact of the 2013 ASCO/CAP HER2 revised guidelines on HER2 results in breast core biopsies with invasive breast carcinoma: a retrospective study