The purpose of this study was to present an arthroscopic technique for the treatment for posteromedial and central cartilage defects of the talus using anterior arthroscopic portals and without performing a medial malleolar osteotomy.

Nine fresh cadavers were dissected. Autografts were implanted under arthroscopy using a retrograde osteochondral transplantation system, and their position was estimated using specific angular calibrators and later confirmed by software analysis of two photographs of the disarticulated ankle joint.

In eight cases, the congruence between the surrounding articular cartilage and the cartilage of the graft was high, with differences measuring <1 mm. There were no iatrogenic cartilage lesions of the tibial plafond and no fractures of the talus. All the autografts remained stable during full range of motion cycles of the ankle joint. One failure was reported.

This cadaveric study showed that the retrograde osteochondral autograft transplantation technique in the talus is feasible. It can be used to restore the posteromedial and central talar articular surfaces using conventional ankle arthroscopic instrumentation and anterior arthroscopic portals without resorting to a medial malleolar osteotomy. Further clinical and biomechanical studies are required to prove the efficacy of this technique and its reproducibility in routine clinical practice. 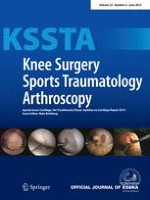 Comparison of 1.5- and 3-T MR imaging for evaluating the articular cartilage of the knee

Alignment does not influence cartilage T2 in asymptomatic knee joints

Use of cell-free collagen type I matrix implants for the treatment of small cartilage defects in the knee: clinical and magnetic resonance imaging evaluation