We report here a case of orthochromatic leukodystrophy with spheroids. A 40-year-old woman developed forgetfulness. About 1 year after the onset, clinical examination confirmed global intellectual deterioration with amnesia, spatiotemporal disorientation, and impairment of judgment. At age 43, she experienced tonic-clonic convulsions several times, and died of pneumonia at the age of 44. Alzheimer’s disease was suspected clinically. Pathologically, there was severe diffuse demyelination of the deep white matter of the frontal, parietal and occipital lobes with relative preservation of the subcortical U fibers. In the central demyelinated areas, myelin loss was severe with diffuse gliosis, moderate loss of axons, and many axonal spheroids. At the periphery of the severely degenerated regions, there were a lot of macrophages and most had non-metachromatic lipid granules. The cerebral cortex was intact. The neuropathological findings of this case are consistent with hereditary diffuse leukoencephalopathy with spheroids (HDLS). Ten cases of HDLS were reviewed and presented many findings in common. The gray matter was intact and U fibers were well preserved in most cases. In white matter lesions, severe loss of myelin, moderate to severe axonal loss, much axonal swelling, and the presence of macrophages and hypertrophic astrocytes were common findings. In some cases with HDLS, dementia appeared without obvious neurological manifestations in the early stage. We should remember that some cases with HDLS show clinical symptoms similar to Alzheimer’s disease, especially in the early stage. 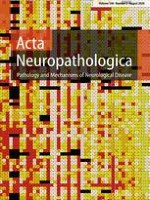 Regional and cellular pathology in frontotemporal dementia: relationship to stage of disease in cases with and without Pick bodies