This retrospective clinical study was approved by the St. Marianna University School of Medicine institutional review board (Approval No. 2598). Included in the study were 32 patients with thoracic esophageal cancer treated by subtotal esophagectomy that included anastomosis or cervical lymph node dissection but no extraesophageal surgery. All were treated at St. Marianna University Hospital between April 2014 and March 2017, and consent to use their anonymized data for research purposes had been obtained from all individual participants included in the study.

The thoracic esophageal cancer was treated by thoracoscopic or laparoscopic-assisted subtotal esophagectomy, which are the standard surgical procedures used at our hospital. Patients undergoing the surgery were placed in a left lateral recumbent position, and the six ports were placed on the right side of the body. Thoracic lymph node dissection was performed in all patients in accordance with the extent of dissection stipulated by the Japan Esophageal Society. Nodes 105, 106rec, 107, 108, 109, 110, and 111 were dissected, and the esophagus was then dissected [ 15]. Particularly focused bilateral dissection of area 106rec nodes, which surround the RLN, was also performed in all patients. Once the thoracic procedure was completed, the patient was placed in the supine position, and the abdominal procedure was performed. The cervical procedure was performed simultaneously by an otolaryngology surgeon. The lymph node dissection included areas 1, 2, 3a, 7, 9, and 20 and was followed by construction of a narrow gastric tube. The cervical procedure was performed on patients with cancer of the upper or middle thoracic esophagus and superior mediastinal lymphadenopathy. If bilateral dissection of area 101 lymph nodes was required, both subclavian arches were transected; the infrahyoid muscles were not dissected but rather left intact. If additional dissection of the area 104 nodes was required, the sternocleidomastoid muscle over the area of dissection was first transected. Upon completion of the dissection, a gastric tube was passed upward via the posterior mediastinal route, and cervical esophagogastric anastomosis was performed. The sternocleidomastoid muscle was repaired by suturing. In patients in whom cervical lymph node dissection was not performed, the left subclavian arch was transected, the infrahyoid muscles were left intact, traction was applied to the esophagus, and anastomosis was performed.

Laryngoscopy was performed at bedside on postoperative day (POD) 1, and RLNP was diagnosed when vocal cord paralysis (VCP) was detected upon this examination and regardless of whether the paralysis was unilateral or bilateral. In addition, patients were examined physically on POD 7, and hoarseness detected at that time was taken as indirect evidence of RLNP.

Evaluation of Swallowing Function by Means of VF

Contrast VF was performed preoperatively and on POD 7 for evaluation of patients’ swallowing function. VF evaluation involves analysis of a lateral view obtained with the patient in a seated position and is performed as a joint exercise by a speech therapist, neurologist, and gastroenterologist. The contrast material used to define the esophageal morphology was prepared by diluting 35 mL of a nonionic low-osmolar contrast medium, iopamidol, in 40 mL of water, and then mixing the solution with 1 g of thickener. For both VF examinations, each patient swallowed 5 mL of this contrast material, VF was performed, and the images were examined for an impaired pharyngeal phase reflex, pharyngeal residue, laryngeal invasion, or aspiration. Swallowing difficulty was diagnosed if any of the aforementioned was observed. The patients’ ability to ingest food was examined on VF images obtained on POD 7. An inability to ingest food was diagnosed if one or more of the following criteria were met: evidence of aspiration, evidence of laryngeal invasion preventing rapid clearance by coughing, or evidence of a large amount of pharyngeal residue that could not be cleared by additional swallowing, despite absence of evidence of aspiration or laryngeal invasion [ 14].
Anzeige

The following preoperative variables were obtained from patients’ clinical records. Patients’ sex, age, existence of a swallowing disorder, stage of the esophageal cancer, T-factor (depth of invasion), N-factor (lymph node metastasis), and nutritional status (according to the Onodera prognostic nutritional index [PNI] [ 16] and prealbumin [PA] concentration). The disease stage, T-factor, and N-factor corresponded to the TNM classification [ 17]. The following intraoperative variables were noted: duration of surgery, duration of the cervical procedure, blood loss volume, and performance of cervical lymph node dissection. The following postoperative variables were noted: presence of RLNP during laryngoscopy on POD 1 and hoarseness on POD 7.

Study variables were compared between patients with an intact ability to ingest food and those in whom this ability was absent, and differences were analyzed by means of univariable logistic regression analysis or Fisher’s exact test. Association between clinical factors detected by VF on POD7 and RLNP was determined on the basis of odds ratios. Variables for which a P value < 0.20 was obtained by univariable analysis were entered into a multinominal logistic regression analysis in which P < 0.05 was considered statistically significant. JMP software (version 12; SAS Institute, Cary, NC, USA) was used for all statistical analyses.

Incidences of Postoperative RLNP and Hoarseness

Some type of abnormality was evident during postoperative VF in 24 (75%) of the 32 patients, as shown in Table  2. Swallowing difficulty that was sufficiently severe to cause an inability to ingest food was diagnosed in 11 (34.4%) patients.
Table 2
Incidence and details of VF-detected pharyngeal-phase swallowing disorders
VF videofluoroscopy, AFIA absence of food intake ability
aAFIA despite observation of a large amount of pharyngeal residue, laryngeal invasion, or aspiration

When we analyzed study variables in relation to swallowing difficulty including absence of the ability to take in food orally (Table  3), we found the PNI ( P = 0.015) and cervical lymph node dissection ( P = 0.010) to be significant. When we entered items shown to be significant by univariable analysis into the multinominal logistic regression model (Table  4), we found cervical lymph node dissection to be significantly related to absence of the food intake ability ( P = 0.0075) (Table  5).
Table 5
Results of multivariable analysis of factors related to absence of food intake ability
OR odds ratio, CI confidence interval, PA prealbmin concentration, PNI Onodera prognostic nutritional index
Anzeige

Relation Between RLNP and VF Findings

No significant association was found between the presence of RLNP and any of the factors examined by VF, i.e., between RLNP and an impaired laryngeal reflex, pharyngeal residue, laryngeal invasion, or aspiration (Table  6).
Table 6
Relations between VF finding on postoperative day 7 and RNLP
VF video fluoroscopy, RLNP recurrent laryngeal nerve paralysis, OR odds ratio, CI confidence

We are grateful to Jin Shimada for suggesting the topic treated in this paper. We are also grateful to Hiroko Tina Tajima for carefully proofreading the manuscript.

The authors declare that they have no conflict of interest.
Open AccessThis article is distributed under the terms of the Creative Commons Attribution 4.0 International License ( http://​creativecommons.​org/​licenses/​by/​4.​0/​), which permits unrestricted use, distribution, and reproduction in any medium, provided you give appropriate credit to the original author(s) and the source, provide a link to the Creative Commons license, and indicate if changes were made. 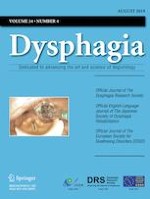 What Are We Really Measuring? A Content Comparison of Swallowing Outcome Measures for Head and Neck Cancer Based on the International Classification of Functioning, Disability and Health (ICF)

Dysphagia and Associated Pneumonia in Stroke Patients from Brazil: A Systematic Review