Umbilical pilonidal sinus (UPS) has an atypical clinical presentation and is therefore not well recognized. The aim of this case series and review of the literature, is to provide more insight in the underlying pathology and a guidance for the treatment of this condition.

Three recent clinical cases are described that made us perform a multi-database research was to reveal relevant literature.

Three relevant clinical cases from our clinic are described. Thirth three studies, describing 463 patients were included. Most studies were case reports or series; few were case series or cohort studies. UPS develops by loose hairs getting caught in the umbilical pit and subsequently penetrate the umbilical cicatrix by friction. In this way an inflammatory response is triggered, resulting in oedema that further narrows the umbilical orifice, hence forming a sinus. Several risk factors are identified. There is no particular consensus on the treatment of this disease. Although older literature advocates immediate umbilical excision without exception, recent studies provide evidence that supports multiple courses of conservative treatment. Several cases were described in which surgery consisted of excision of the sinus and hair tufts in contrast to excision of the entire umbilicus.

Umbilical pilonidal disease has an atypical presentation and might mimic conditions such as incarcerated hernia, Anterior Cutaneous Nerve Entrapment Syndrome or urachal cyst. Risk factors that can bring physicians closer to a reliable diagnosis are identified. An example of a treatment algorithm is provided, suggesting surgery should only be considered when conservative treatment fails. 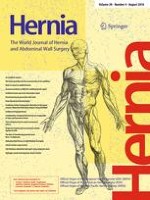 The incidence of inguinal hernia and associated risk factors of incarceration in pediatric inguinal hernia: a nation-wide longitudinal population-based study