A male Persian cat was presented with a history of alopecia at the dorsal tail region, with mild pruritus, flaking of skin and the owner’s complaint of pruritus on herself and her family members. All the vital signs of the cat were found within the normal reference range. Skin scraping and hair samples were found to be negative for Demodex spp. and Sarcoptes spp. of mites, pediculosis and fungal infestation. Physical examination of the whole body revealed absence of fleas or flea eggs. Further, food hypersensitivity was ruled out by gradually changing the previous wheat based diet to a commercial cat food. However, eggs of Cheyletiella spp. were seen on microscopic examination of skin scraping and the lesions on the owner’s body were indicative of infestation by Cheyletiella spp. as it’s zoonotic in nature. A treatment protocol was initiated that included Ivermectin and bath with a shampoo containing selenium sulphide. Owners were advised to apply Calamine lotion on their lesions. Both the owner and patient recovered uneventfully 3 months post-therapy. 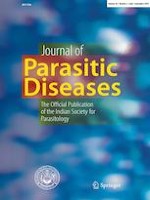 The impact of vinegar on pathogenic Acanthamoeba astronyxis isolate

The Relation between Toxocariasis and Toxoplasmosis co-infection and the presence of Rheumatoid Factor (RF) in people with hydatidosis in Southwestern Iran, from 2013 to 2018