Gas chromatography–mass spectrometry (GC–MS) in electron ionization (EI) mode is one of the most commonly used techniques for analysis of synthetic cannabinoids, because the GC–EI-MS spectra contain characteristic fragment ions for identification of a compound; however, the information on its molecular ions is frequently lacking. To obtain such molecular ion information, GC–MS in chemical ionization (CI) mode is frequently used. However, GC–CI-MS requires a relatively tedious process using reagent gas such as methane or isobutane. In this study, we show that GC–MS in photoionization (PI) mode provided molecular ions in all spectra of 62 synthetic cannabinoids, and 35 of the 62 compounds showed only the molecular radical cations. Except for the 35 compounds, the PI spectra showed very simple patterns with the molecular peak plus only a few fragment peak(s). An advantage is that the ion source for GC–PI-MS can easily be used for GC–EI-MS as well. Therefore, GC–EI/PI-MS will be a useful tool for the identification of synthetic cannabinoids contained in a dubious product. To the best of our knowledge, this is the first report to use GC–PI-MS for analysis of synthetic cannabinoids. 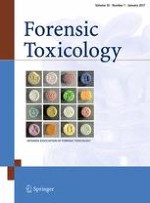 Quantitation of biperiden in whole blood by MALDI-QTOF tandem mass spectrometry, and estimation of new metabolites in urine of deceased subjects treated with biperiden antemortem