LEN conceived the study. LEN and DD designed and executed the experiments. DD optimized and performed HSC isolation, migration assay, western blot, flow cytometry, and qRT-PCR. MAB assisted in the design, execution, and data analysis for the flow cytometry. LEN and DD contributed to the writing of the paper and organizing the figures. All authors approved the final version.

C5a and its cognate receptor, C5a receptor (C5aR), key elements of complement, are critical modulators of liver immunity and fibrosis. However, the molecular mechanism for the cross talk between complement and liver fibrosis is not well understood. C5a is a potent chemokine regulating migration of cells in the innate immune system. Since activation and migration of hepatic stellate cells (HSC) are hallmarks of liver fibrosis, we hypothesized that C5a contributes to fibrosis by regulating HSC activation and/or migration.

Primary cultures of mouse HSC increased expression of alpha smooth muscle actin (α-SMA) and collagen 1A (Col1A1) mRNA in response to activation on plastic. Expression of mRNA for C5aR, but not C5L2, a second C5a receptor that acts as a negative regulator, increased in parallel with markers of HSC activation in culture. Increased expression of C5aR on activated HSC was confirmed by immunocytochemistry. Cell surface expression of C5aR was also detected by flow cytometry on activated HSC isolated from mice expressing GFP under the control of the collagen promoter after exposure to chronic carbon tetrachloride. To understand the functional significance of C5aR expression in HSC, we next investigated whether C5a influenced HSC activation and/or migration. Challenge of HSC with C5a during culture had no effect on expression of α-SMA and Col1A1, suggesting that C5a did not influence HSC activation. Another important characteristic of HSC is their migratory capacity; migration of HSC in response to platelet derived growth factor (PDGF) and monocyte chemoattractant protein-1 (MCP-1) has been well characterized. Challenge of HSC with C5a enhanced HSC migration almost as efficiently as PDGF in a two-dimensional wound healing and Boyden chamber migration assays. C5a also stimulated expression of MCP-1. C5a-induced cell migration was slowed, but not completely inhibited, in presence of 227016, a MCP-1 receptor antagonist, suggesting C5a-induced migration occurs via both MCP-1-dependent and -independent mechanisms. 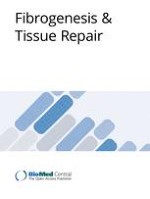