Different dissection studies as well as comparative studies about the anterolateral ligament of the knee (ALL) already exist and the structure’s topology and properties have been shown. However, most of the studies investigating the ligament were performed in embalmed knees, which is thought to change the structural integrity of ligaments and thus the topologic and dynamic measurements. Since the biomechanical function of the ALL is not fully understood until today and a correlation with the pivot shift phenomenon is yet speculative, further studies will have to clarify its definitive importance. Its function as a limiter of internal rotation and lateral meniscal extrusion leads to the assumption of a secondary knee stabilizer.

Twenty paired fresh-frozen cadaveric knees of ten donors have been dissected in a layerwise fashion. After identification of the ALL, topologic measurements were undertaken using a digital caliper.

The ALL could be identified as a tender, pearly structure in front of the anterolateral joint capsule in only 60% of the dissected knee joints. Only 20% of donors had a bilateral ALL while 80% had an ALL only in one side. Mean length, thickness and width as well as topographic measurements were comparable to other available studies investigating fresh-frozen cadavers.

Anatomy and topography of the ALL seem to be highly variable, but consistent within certain borders. Prevalence has to be argued though as it strongly differs between studies. The impact of an ALL absence, even if only unilateral, needs to be investigated in clinical and imaging studies to finally clarify its importance. 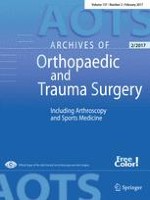 Conversions from anatomic shoulder replacements to reverse total shoulder arthroplasty: do the indications for initial surgery influence the clinical outcome after revision surgery?

Lower limb reconstruction in tumor patients using modular silver-coated megaprostheses with regard to perimegaprosthetic joint infection: a case series, including 100 patients and review of the literature