Thirty-seven patients were assessed after 6.5 months and after 16.0 months. The 16-month MRI analysis revealed for all patients continuous ligament healing for the CC-complex and the superior AC ligament with in the average hypertrophic consolidation compared to the control side. Separate conoid and trapezoid strands (double-strand configuration) were detected in 27 of 37 (73%) patients, and a single-strand configuration was detected in 10 of 37 (27%) patients; both configurations showed similar CCD data. The ligament healing was not influenced by the point of surgery, age at surgery and heterotopic ossification. The clinical outcome was increased (FU0–FU2): Rowe, 47.7–97.0 pts.; TAFT, 3.9–10.6 pts.; NAS pain, 8.9–1.4 pts. (all P < 0.05).

The arthroscopically assisted double-CC-bundle stabilization within 14 days after acute high-grade ACJ separation showed 16 months after surgery sufficient consolidations of the AC and double-CC ligament complex in 73%. 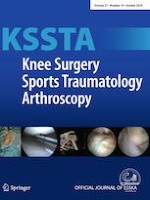 Discoid lateral meniscus: a simple horizontal tear was associated with less articular cartilage degeneration compared to other types of tear