The online version of this article (https://​doi.​org/​10.​1007/​s10143-018-0998-1) contains supplementary material, which is available to authorized users.
Christian Fung, Evangelos Mavrakis and Andreas Filis contributed equally to this work.

In patients with aneurysmal subarachnoid hemorrhage (aSAH) and multiple aneurysms, there is a need to objectively identify the ruptured aneurysm. Additionally, studying the intra-individual rupture risk of multiple aneurysms eliminates extrinsic risk factors and allows a focus on anatomical factors, which could be extrapolated to patients with single aneurysms too. Retrospective bi-center study (Department of Neurosurgery of the University Hospital Duesseldorf and Bern) on patients with multiple aneurysms and subarachnoid hemorrhage caused by the rupture of one of them. Parameters investigated were height, width, neck, shape, inflow angle, diameter of the proximal and distal arteries, width/neck ratio, height/width ratio, height/neck ratio, and localization. Statistical analysis and logistic regressions were performed by the R program, version 3.4.3. N = 186 patients with aSAH and multiple aneurysms were treated in either department from 2008 to 2016 (Bern: 2008–2016, 725 patients and 100 multiple aneurysms, Duesseldorf: 2012–2016, 355 patients, 86 multiple aneurysms). The mean age was 57 years. N = 119 patients had 2 aneurysms, N = 52 patients had 3 aneurysms, N = 14 had 4 aneurysms and N = 1 had 5 aneurysms. Eighty-four percent of ruptured aneurysms were significantly larger than the largest unruptured. Multilobularity of ruptured aneurysms was significantly higher than in unruptured. Metric variables describing the geometry (height, width, etc.) and shape are the most predictive for rupture. One or two of them alone are already reliable predictors. Ratios are completely redundant in saccular aneurysms. 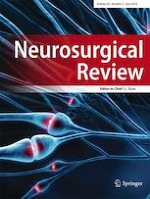