The objective of this study was to simplify the anatomically safe and reproducible approach for BoNT injection and to generate a detailed topographic map of the important anatomical structures of the temporal region by dividing the temporalis into nine equally sized compartments.

We recommend compartments Am, Mu, and Pm (coordinates of the rectangular outline) as areas in the temporal region for BoNT injection, because using these sites will avoid large blood vessels and tendons, thus improving the safety and reproducibility of the injection. 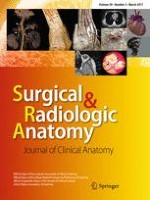 The cisternal segments of the oculomotor nerve: a magnetic resonance imaging study

An unusual course of aortic arch through an accessory fissure of left upper lobe of the lung: extramediastinal aortic arch