The transition muscle between the palatopharyngeus (PP) and the superior constrictor of the pharynx (SCP) encircles the pharyngeal isthmus from behind and is designated as the palatopharyngeal sphincter (PPS). The PPS is inferred to play important roles for velopharyngeal closure, but its existence remains controversial and its roles have been regarded as being played by the SCP. The present study aimed to clarify the anatomical status and functional implications of the PPS.

Macroscopic and microscopic examinations were performed on 39 and 4 cadavers, respectively. In the former, the bilateral PPSs and their adjacent structures were exposed from outside and/or inside. In the latter, the velums embedded in paraffin were cut into frontal or sagittal sections and alternately processed with HE and Azan stains.

The PPS originated from the nasal aspect of the lateral half of the palatine aponeurosis and the inferior margin of the medial pterygoid plate and was distinguishable from the PP descending in and along the palatopharyngeal arch and the cranialmost portion of the SCP in its origin. It passed dorsally on the lateral side of the levator veli palatini and traversed around the salpingopharyngeal fold running longitudinally. It then entered below the SCP and ran toward the pharyngeal raphe with SCP muscle fibers intermingled.

The PPS is a muscle distinct from the SCP. Its contraction produces Passavant’s ridge and conceivably enhances the efficiency of velopharyngeal closure by pressing the salpingopharyngeal fold and the musculus uvulae ridge against the velum. 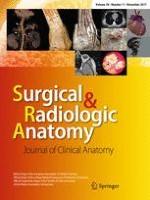 The radiological distance between the lumbar pedicle and laminar edges