Recent research indicates that the skeletal muscles of the human body do not function as independent actuators. Instead, they seem to be linked by connective tissue forming myofascial chains. While the existence of such meridians has been demonstrated for the ventral and the dorsal side of the body, no data are available for morphological fusion of lateral muscles. This study aimed to provide evidence for the inferior part of the lateral myofascial chain.

Fourteen legs (7 embalmed cadavers, four ♂, 86 ± 7 years) were dissected to reveal a potential myofascial continuity between the fibularis longus muscle, more detailed, its fascia, and the iliotibial tract (ITT). Three investigators judged the general existence as well as the degree and characteristics of the continuity. If an anatomical continuity was evident, strain was applied to both structures in order to evaluate the tissues’ ability for tensile transmission.

The iliotibial tract fuses firmly with the crural fascia and the degree of continuity suggests that moderate amounts of strain might be transmitted. However, biomechanical studies precisely quantifying this tensile transmission are warranted in order to estimate the relevance of the linkage for the locomotor system. 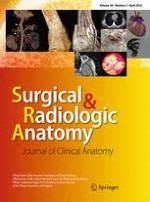 The anterolateral ligament of the knee: a radiologic and histotopographic study

How does wrist position affect the length of the distal radioulnar ligament: a three-dimensional image study in vivo?