The aim of this study was to demonstrate that ultrasonography may allow a precise assessment of the primary stabilizers of pisotriquetral joint (pisohamate, pisometacarpal, and ulnar pisotriquetral ligaments).

This study was initially undertaken in eight cadavers. Metal markers were placed in the ligaments using ultrasonographic guidance, followed by the dissection of the wrists. High-resolution ultrasonography was then performed in 15 volunteers (30 wrists) for the analysis of the presence, appearance, and thickness of the ligaments.

At dissection, the metal markers were located in the ligaments or immediately adjacent to them, confirming that they were correctly depicted using ultrasonography. The three ligaments could also be identified in each volunteer. The optimal positioning of the probe and the dynamic maneuvers of the wrist allowing the strain of these ligaments could be defined. No significant changes in the appearance and thickness of the ligaments could be observed.

The three ligaments stabilizing the pisotriquetral joint can be identified using ultrasonography. Further studies are now required to know whether this knowledge may be useful in the assessment of pain involving the ulnar part of the wrist. 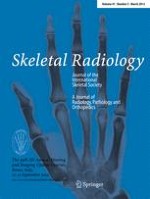 Stable or unstable tear of the anterior cruciate ligament of the knee: an MR diagnosis?